Hi
can anyone give me some advice on this gemstone. Please. I have purchased it to be a natural black opal. It might have 2 botches on the back of the opal. The display of colour are amazing. The photos are taken at different angles.
Thank you 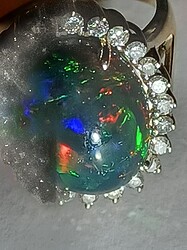 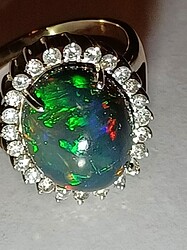 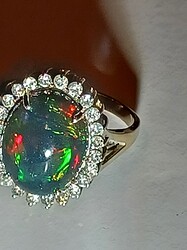 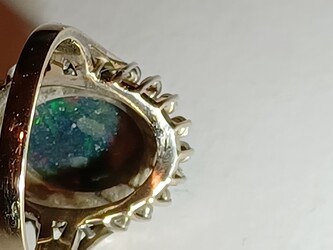 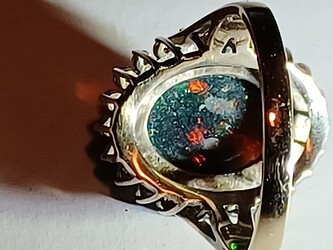 Hard to tell from the photos. It doesn’t look treated but could be an assembled stone. The splotches on the back look like air bubbles in a glue layer. Normally, the backing on a triplet or doublet is opaque so the glue layer isn’t visible, tho.
Try taking a picture from the side to see if the top is a clear layer. Really need to look at it with a loupe.

The stone needs to be viewed from the side to give enough information on it. I’ve seen nice opals not get a finish on the bottom of the stone before. The bottom of your stone may just not have been worked.
Otter

hi
thank you for the feedback. 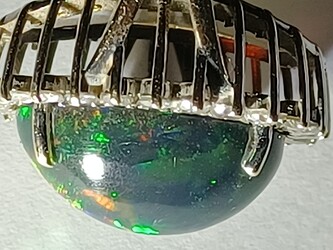 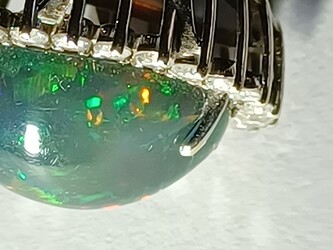 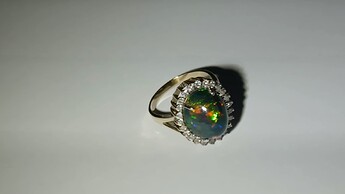 I tried to upload a movie of this opal. 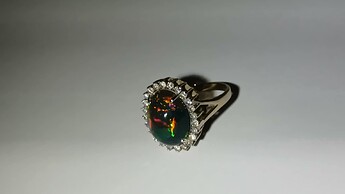 Jackbus,
From the side shots you loaded, my initial decision is, this is a solid opal. I can not tell you if it has been smoked. I would have to see it in person. The spots on the back could be someone testing it to see if it was indeed smoked or treated in some way. Have you dropped a bit of water on the back of the stone where it has those spots to see if there is any difference in color? It is a beautiful opal and you should show it off.
All the best,
Otter

From the last 2 pictures, it looks like an Australian Andamooka Treated Matrix Opal. I have one identical with yours, 13.5 ct fancy cut. It is a very beautiful opal, but cheap value - around $ 30/ ct.

Hi,
I dropped a bit of water on the back and nothing happened.
Thank you for your replies.

Hi,
what does it mean if you dropped water on it and it changed or didnt change colour?
Thank you

A wet opal looks almost like it has been polished. The scratches should disappear if it has not been smoked. If they still show up as lighter spots, it has been smoked or treated. I’ve done this same test on a few opals. It should NOT be done to anyplace that will show with wear. Smoking an opal to change the color only goes so deep into the stone. Opal is a porous stone and some will take treatments much better than others.

hi,
the opal is set in 18ct white gold surrounded with diamonds. Would you set a cheap gemstone of any kind in 18ct with diamonds? If the opal is only worth $30 per carat would it be worth the time and effort?
Thank you

hi
Deep down in the stone the main colours are blue and green but as get close to the surface of the stone it more colour like the orange, red, yellow, pink, purple and different shapes of green and blue.
Thank you

Opal matrix is usually treated by soaking a preformed and polished opal in sugar and then heating the dried stone with concentrated sulfuric acid to char residual sugar and deposit black carbon in surface pores. This treatment is only skin deep so deep scratches will reveal a white base. However, the whitish spots on the underside of the ring stone could still be natural sandstone material. The only way to test is to do a fine scratch on one of the red areas under the ring. If this shows white (after wetting with water) then you MAY possibly have a treated opal. If the area is still red you don’t have a treated stone.

From the side view pics it appears to be too transparent to be Andamooka matrix opal. You may very well have a valuable stone, however, the only way to be sure is to have the stone sent to a well established gemological society so the stone’s origin and authenticity can be determined scientifically.

The fact that you can see colour on the back of the stone would, to me, indicate some sort of treatment, what I can’t say but as it appears to be through the whole stone, it would indicate something like what IvanIvars has described.

All Black Opal grading is based on the darkness of the potch from N1 to N7, N1 being Black and N7 being Light grey. I essence it’s a scale of the potch darkness looking through a colourful crystal opal on top, if there is no potch then it’s a crystal opal and it translucent.

Okay, that’s a fairly simplistic explanation but will hopefully provide a bit more clarity (pardon the pun) on one aspect of grading cut opals.

Yours unfortunately has neither black potch nor translucency which is why I feel it has been treated.

Hi,
Thx for the feedback. I tried the water and scratch test that Ivanlvars suggested but nothing happened. What about Black Crystal Opal. I read an article stating than don’t have potch and i do not think it it glue. Could of someone else test the opal and leave these marks?
Thank you

All of those may well be correct , Ill throw something different into the ring .It could be 1. a Chatham created black BOpal . 2. Russian Created BOpal .3. Ethiopian Opal treated 4. Gilson Created BOpal. I tend to agree with the comment who said the back should show some potch to be consistant with a Lightning Ridge BO . as most is not skin to skin colour . Unless its a LRBO crystal but I too dense for that. Ive a LRBO crystal must be 50 years out of the ground and its not like that . as with others we cant tell by images alone.Further diagnostics required . Its a pretty enough piece.Ive some early Gilson that looks very much like it , but better ! in any case Ive to agree that you should get it to someone who is capable of forensics with Opal identification … like the GAA . good luck …isnt Opal magnificent !!! wait till we get some opal from off the planet earth …now that will be something …