Does anyone know if this is a fossil

I found this stone and was accidentally dropped, and revivals not sure what to do with it of if it is anything.i tried fossil forums and pic are not downloading. Museams are closed aswell. Thanks your time. 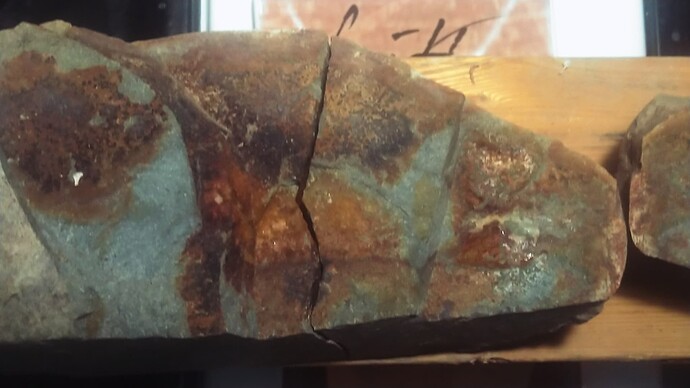 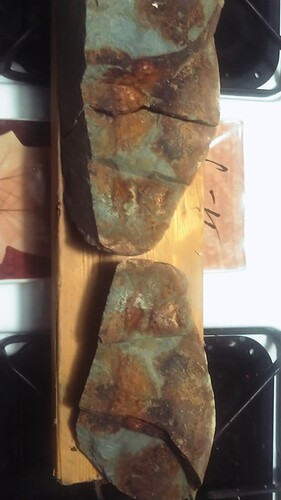 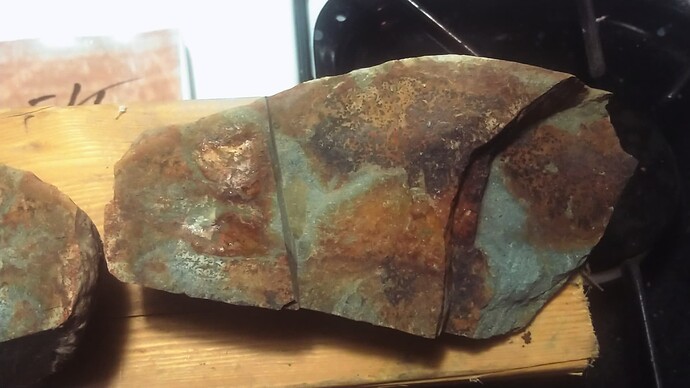 I suggest you try the Internet for the geological location ie where the rock came from. Usually if a rock formation is fossiliferous that information is on the net. Often your local rock and mineral club members know all the fossils in your region (but not old fossils like me!). Cheers. Ivan

What you have there is a rare find…it’s a fossilized rock!

It looks similar to iron stains in sedimentary rock. It would be good to know the location where the specimen was found.

The stone was found in the creek in Mackey idaho. We also found some slate it appeared to be after we cutt into it. We were cleaning up slash and dealing with water drainage coming off of sawtooth Mt. Range. When I stumbled upon it laying on creek,landowner had no Idea and wished best of luck finding out.

? ?? . It sounds crazy to me, but a fossil is sediment that is concreted into a rock, which becomes a sedimentary rock, which fossils tend to stick to more then just a rock, if I’m not mistaken, your saying it’s a old rock with just sediment from a sedimentary rock which would be called a fossilized rock.? Correct.

Sediment that has other rocks in it, or even different sediments is called a concretion. A fossil is a multi step process where, with the right conditions, a once living form either animal, part of an animal or plant falls to the ground, or bottom of a lake or sea, in the case of fish…

(I am being very broad here so one will find other things not mentioned here that can be fossilized).

Lets take, as an example, a tree. It falls over from a windstorm or something else and is covered with mud. The tree gets covered with mud or something similar. Over years, more mud forms around the tree and compresses, forming rock. Slate/Shale is a perfect example of mud turned to rock. Then water carries minerals through cracks in the newly formed rock to the now rock encased tree and replaces the decaying tree with that mineral, needs to be a hard mineral. When this process is complete, the tree has now been fossilized!

Fast forward now several years, (7 or 8 million years)! Remember the mud that turned to rock around the tree? Now that softer rock has rotted away, turning to dirt again or crumbly stone but the fossilized tree is still there, perfectly preserved because a harder mineral has replaced the wood. Now your digging out in the desert somewhere, your shovel hits something hard, after some work you’re able to pry out this log. It may have bark on it with stubs of branches, have wood grain and look just like a log you might put on a campfire. But this log, it’s composed of stone. That’s a fossil!

It looks more like some copper rich hydrothermal veins (bluish areas) cutting through an older sedimentary rock (brownish areas). No patterns present that would lead me to think of a fossil.

Wow, thank you for your knowledge, I understand the process now. I am really trying to learn as much as I can about how, when and why with all these stones on this forum, and I would like to thank you and everyone else for taking time to explain basic in some aspects of the gem world. It’s a pretty cool stone I think I will glue it back together and set it in the collection with a bit about it. Thanks agian

Hello, me again I apologize my interruption but if you have time I have a question. I have been researching my stone that you called rare. I am having a hard time finding anything that is equal or can relate to the stone you called a fossilized rock. Is there any site or book you can refer to for information on such stone. All I want to is learn more about why, when and where, and how come they are rare in so. Thank you for your time.

Sometimes a stone/mineral can be identified by a picture. I am sorry, but I was kidding about the stone being rare. The reddish material is more than likely Rhyolite, an igneous rock, or volcanic. Makes sense as to where you live. It is a very common material but can have some very nice things found in/around it, such as thundereggs…Rhyolite with agate or opal inside of it.

The slightly bluish rock could be any number of types of rock that form with Rhyolite. But to get closer to identification, more information is needed. Search on Google, “rocks of Oregon”, there are a lot of nice books to see there that help with identification and also give you directions to different sites and what you might find there.

Igneous, or volcanic rock, lava, is a bad place to look for fossils as the hot magma would simply burn up any organic materials it comes in contact with. Your stone may loo, cool after being sliced and polished, it would have a smokey look to it from the Rhyolite.

Other than that, on here there is almost a lifetime of things to read and learn and then there is always google. The very best way is to join a club, then go on field trips with folks that can tell you just what your working on.

Yes, your information helps termindiously and I can’t tell ya how much I appreciate your time. Thanks agian and have a happy new year