Can you tell me if this is emerald?

Hello All, A month ago I posted photos of the ring on right and was told it was green tourmaline. I bought another ring with a green stone a few days ago . The stone is set in 12 grams of 18k gold . Could it be emerald ?
Thanks for your help ! 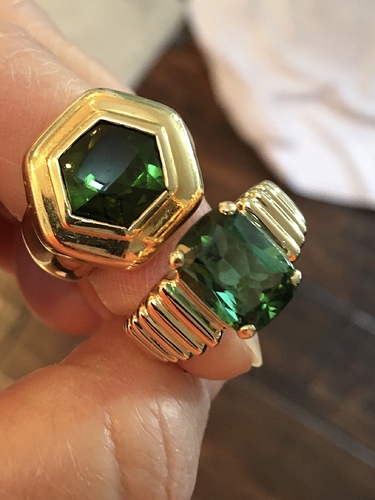 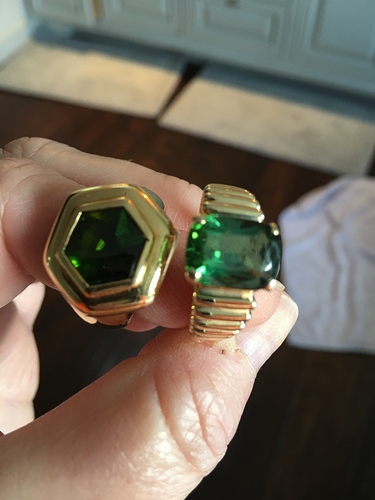 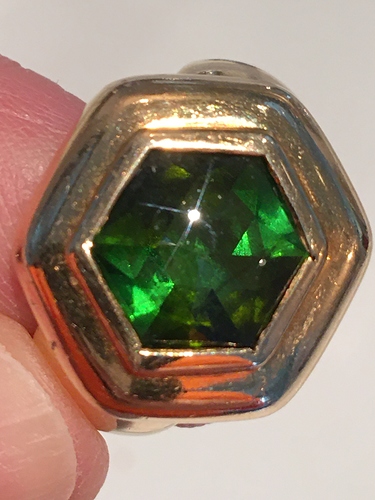 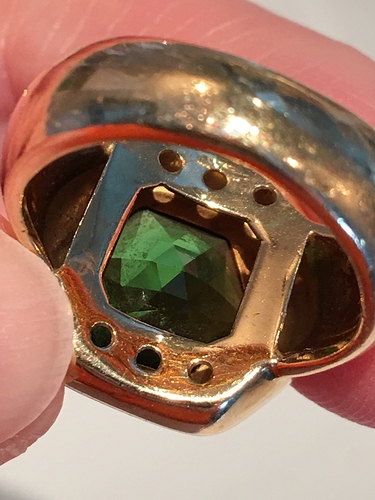 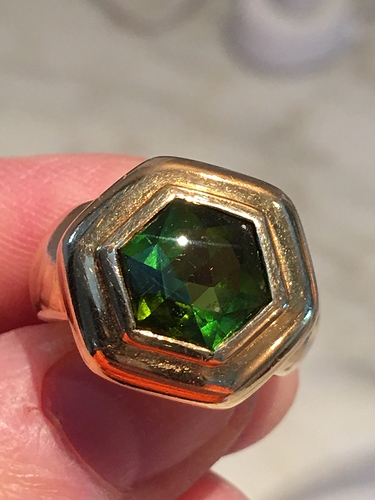 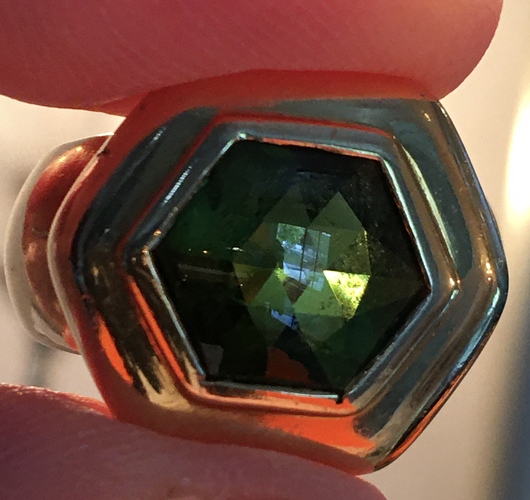 It’s hard to tell from photos, but it does not scream emerald to me. Tourmaline would again be my first port of call. What is the carat of the gold and what did the seller tell you?

Well someone thought enough of the stone to mount it in a reasonable quantity of high carat gold (sorry I just realized you mentioned that in your original post)…what did your seller say the stone was?

Hi, He said topaz! I might take a video tomorrow and upload . I think you’re right about tourmaline though . Thanks

Looks like tourmaline. The olive green cast in the third and last picture appears to be typical tourmaline color. Additionally, the hexagonal shape is characteristic of tourmaline cut on the c-axis. In general, emeralds are cut deep to emphasize color and a hexagonal shape would be rare…

Also possibly topaz or if you are very lucky, Tourmaline.

I’ve pulled glass out of all karats of gold, which are sometimes stamped differently than they really are (including of course base metals/paste stamped as 18k/750/plat etc)

Oooooooo…well the hallmark could be faked I guess…we never saw much of that in our last home (the UK) as hallmarking is so strictly controlled, nor do we see it much in NZ, but it is a possibility, no doubt.

They say they are strict about it in Canada, but they don’t do anything about it.

Any chance of a picture or two of the hallmark inside it?
Might help narrow things down a little more for you.

Hi! From the photos alone it does not look like an emerald. You could use a Chelsea Filter to see if there any Chromium present. It looks like either Tourmaline or Diapotase

Pretty sure it’s not an emerald, The inclusions seen on the fourth photo do not belong to emerald

Hi. I think is a tourmaline. It show the classic colour of this stone in photo n. 3 and 5. If you have a chelsea filter you can see the color. I hope you are lucky and your stone become red so you have a Chrome tourmaline… african emeralds don’t change color at Chelsea filter.
Have a nice day!

From the pictures alone one cannot tell for certain whether the stone is emerald or not. Having said that, the finished shape of a stone, after being faceted, usually does not reflect on the stones crystalline structure. When a stone is faceted, the finished shape is determined by the design wanted for the end result and most important, getting the most finished material out of a rough stone. There could have been a crack or deep chip or some other imperfection in the original piece of rough that deemed the stone be cut in that particular shape.
As for your piece, the color seems to be slightly darker than one would expect for a quality emerald but it does have inclusions in it, that could be a sign of an emerald. Almost all natural emeralds have inclusions in them, (beware ones that don’t as they probably are lab created)…or super expensive because of their rarity.
Tourmalines typically are clear and do not have inclusions in them, with the exception of cheaper stones.
As for the color, it could be the lighting when the pics were taken or the camera itself.

All of the guesses in the world will not answer the question…do the testing and remove all doubt!!!