I read recently that older parcels of Spinel were sometimes mislabeled and contained Taaffeite. I couldn’t find much on this site regarding Taaffeite; what characteristics differentiate it from Spinel? Thanks all

I would not know the differences but I did find this on wiki https://en.wikipedia.org/wiki/Taaffeite

Thank you, yes I had done some digging and saw this. A friend is a GIA appraiser and I purchased quite a few spinel in the late 90’s now their color looks odd to me. Hopeful? Dreamer, maybe

But she hasn’t seen any Taaffeite but should know more than me. Has anyone actually seen it? Thx much for your response.

Hi, Taaffeite has a very similar chemical make up to Spinel, one very simple way to find out if you may have a Taaffeite is that it is doubly refractive where as Spinel is singlely refractive
when undertaking my gemmology Diploma I was testing some spinels and believe it or not, I actually found a Taaffetie in amongst some rough spinel
to ensure that I had a Taaffeite I had it tested by Laser Ablation with positive results
see photo of Taaffeite 3.15 cts that I faceted 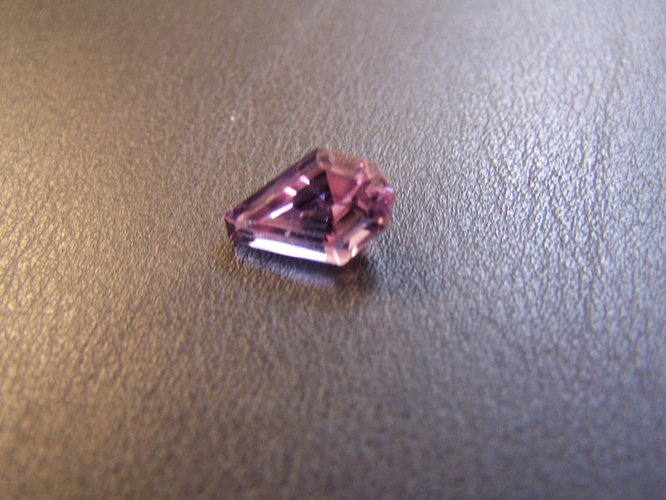 Thank you, that’s the info I needed. What a treasure you found! I love the kite shaped cut, stunning. Thx so much for sharing your knowledge and this image.

@SydP Nice job on the faceting…

This topic has me wondering, how often do faceters by stones as spinel that end up being something else?

I ask because one of the IGS articles on recutting sapphires shows an example where someone bought a relatively inexpensive spinel and during recutting realized it was actually a very expensive Sapphire!

That’s a good question, when I was studying my gemmology diploma, I was using the spectroscope to study rough garnets I had, which I purchased from a good source some 35 years ago from East Africa.
While I was testing I discovered a different type of spectrum to the normal Almadine and Rhodolite garnets. this turned out to be a Ruby which I have since cut 1.2 cts clean, and set in a pendant.
I had been selling these rough garnets at gem shows for several years before I found the ruby and often wonder if someone was lucky enough to buy a ruby from me as garnet rough at around 3$ per cart…
Yep it can happen and does happen.

If you are in the gem biz long enough, you will run into mis-identifications. If you are buying rough, in particular, you need to be constantly alert, because not only are there cheats in the business, but there are lots of dealers who really don’t know much gemology. They know that they go to the mines and buy parcels from miners or, worse, from middlemen. The miners or middlemen may not know exactly what they have, especially if various gem species occur together and they are also not immune to salting parcels with synthetics or outright fakes. Unfortunately, you will more often run into stuff that is worth less money than what it is purported to be than you will run into sapphire masquerading as blue spinel. Last year I did run into a piece of light lavender spinel that a faceter’s widow was selling as sapphire. The price was cheap enough that I bought it knowing that it was spinel (thank you Mr. Refractometer). I also snapped up a half-fist sized piece of morganite at $15/gm and thought I had won the lottery when I looked closer and discovered it was actually pink glass…there were these two large pieces in with a large parcel of small morganite of 2-3 gms. The dealer took a return (I had already paid him) and I bought something else from him with the money instead. In hindsight, I was an idiot to think that such a big morganite was available at $15/gm outside a major museum or high, high end dealer. If I had louped it I would have seen the round bubbles and the small pieces of morganite sitting next to it would have scratched it, as would any piece of quartz that was on sale on the table. Don’t get too greedy!!! I should have known better…I forgot the first rule of gemology: If it looks too good to be true, it is. LOL!

Now I’m talking above about rough, but the same is also true in buying cut stones and esp. old jewelry. Many jewelers and esp. antique and estate dealers or pawnshops either don’t know or don’t care to know about what they are selling. As far as the sales help is concerned, it is what the label says it is or what the customer who consigned it said it was. So hey, hey, hey, let’s be careful out there!
-royjohn

Thanks so much for your response, for some reason I missed this notification. Excuse the late response. I purchased a couple of parcels of Spinels in the late 90’s for something I was designing. Then I read of a couple collectors who had purchased spinels that were mislabeled. I checked mine since this post and though the color was correct, none were Taaffeite. It would have been a nice surprise, much as your large “Morganite” might have been. Thanks again, stay well.