who knows anything about this new mineral discovered called, carmeltazite. its harder than diamonds. 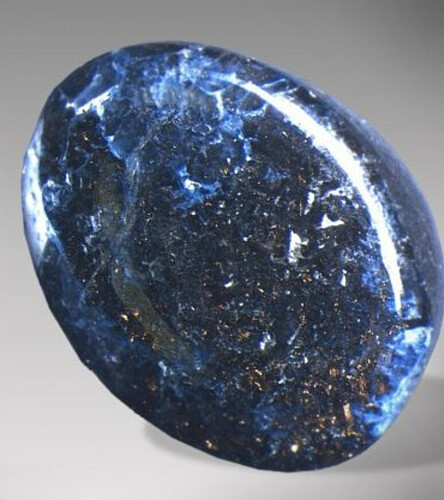 Where did you find information on carmeltazite’s Mohs hardness? There is no hardness value given for this mineral on Mindat, nor is any listed in this 2018 paper on the mineral.

This 2019 Forbes article notes that some media have erroneously reported that the mineral is harder than diamond. On the other hand, it’s theoretical density/SG has been calculated to be greater than diamonds. This might be the source of that confusion.

they say that this new mineral carmeltazite is only found in one place on earth, and that the biggest one ever found is 33.3ct well ive found 2 of these sanme exact minerals and i found them in northern baja, at the base of the elmoro volcano, in a spot where there is one cliff wall that is filled with corundum. the way i came across this new minerals name is because i found this stone that seemed to have a layer of white skin covering half of the stone. and when i went to grind off the skin using the edge of my new diamond tipped blade on my table saw, after grinding for a few seconds, plenty long enough to take off any layer of skin off any stone, i looked at the stone and there was not even the slightest bit of
change to the surface of it., i tried again same results. so i googled, is there a mineral harder than diamonds.? when the images came up of carmeltazite, they were identical to the stones id found, they even changed color from deep purple in natural light, to a pinkish color in indoor light. just like this new sapphire does. 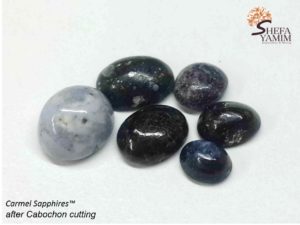 here is an image of the stone that wouldn’t scratch even with my diamond tipped blade. notice the color change , both images are of the same stone. it weighs 52ct 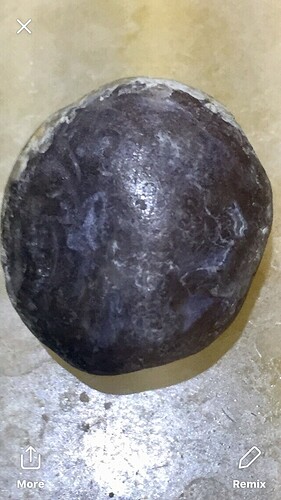 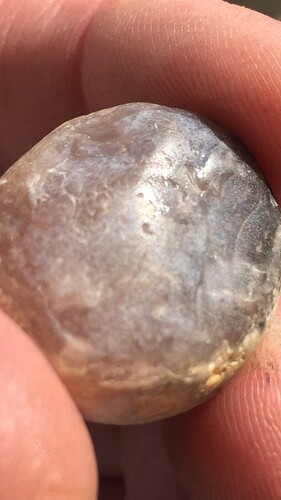 Now I’m curious, how did you cut and polish those cabochons?

The photo in your first post isn’t actually a photo of the new mineral carmeltazite, although it comes up frequently in online searches for carmeltazite. It’s actually a type of sapphire being marketed with the trade name of “Carmel Sapphire.” The carmeltazites themselves are actually tiny crystals found as inclusions inside those sapphires.

There are articles that refer to the “largest crystal” found weighing 33.3 cts, but it’s highly unlikely that’s referring to the carmeltazite itself. It’s most likely referring to a “Carmel Sapphire” of that weight that contains the new mineral. According to the 2018 paper on carmeltazites, these crystals are just 80 microns in length and a few microns thick. That’s microscopic.

I’m not sure which article you found while searching for minerals harder than diamonds, but I did find one of the top results contained this piece of misinformation on the Colore Gemma website. It states:

However, after density tests, scientists found that Carmeltazite is even harder than diamond and is significantly scarcer, making it extremely high.

That statement makes no sense. Density and hardness are two very different physical properties. As the 2019 Forbes article pointed out, some media outlets are confusing density with hardness.

I’m don’t know why the material you found in Baja is resistant to your diamond blade, but since there is so little information known at this time about carmeltazite, it’s impossible to say that the material you found contains this new mineral. (Take a look at the entry for carmeltazite in the Handbook of Mineralogy, updated in 11/2020). What you found may be corundum that appears similar to “Carmel Sapphires,” but that doesn’t mean it contains microscopic carmeltazite.

Re: how did i cut and polish…are you referring to the two images above, the purple one and the image below it are both the same stone, the purple image, photo is taken indoors at night under the overhead artificial light. the picture below it, same stone photo taken during daytime in natural light. as you can see it changes color in different light. this is exactly how i found the stone, with that skin covering half of it. i also have one more of the same exact mineral, ill attach notice how incredibly yellow the other one is when i put the light beging it…whatever mineral they are comprised of, neither one is effected by my diamond tipped blade, as i try to grind each one using the side of the blade, where the diamond tipping overlaps the blade for about a half inch onto the blades side. you understand what i mean, right? if i keep pressing against the side of the blade trying to grind the skin off, after a few seconds, (plenty of time to take any outer layer off of jade) with these two stones, it actually starts to burn the white skin, but doesn’t take it off. both of these attached images are the same stone.

the image with the 6 stones, thats not my image that is from online they use that image when talking about the new mineral Carmeltazite… im trying to figure out what these other two stones are that i found. if you know what they are. please do explain. i would be happy to show the video where i cant scratch them at all with my diamond tipped blade. the video is to large to upload here but i can email it to you so you can clearly see im telling the truth im not mistaken when i say they arent effected, aside from starting to burn if i keep pressing against the diamond tipped blade