Hi, all! I have a couple of cabs that I’ve purchased from various lapidaries. On the surface, they look the same, but they were sold with different names. Before I set and list these, I’d like to have a better idea of what I’m working with.

One was sold as Dendritic Opal (the teardrop), and I have several that were sold as Dendritic chalcedony (the ovals, plus some not in the picture). In my research, it looks like dendritic agate also looks the same. Is this one of those situations where the stone is the same material, but just has different names? or is there something that differentiates one from the other? 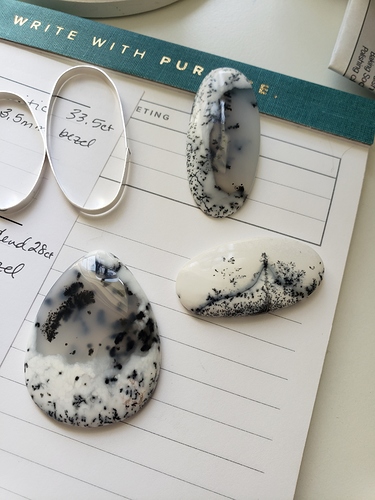 Chalcedony could be considered an ‘umbrella’ name, Agate is a type of Chalcedony as is Jasper, Carnelian, Chrysophase, Onyx and many others. All are polycrystalline structures of quartz and the random banding defines an Agate, whereas straight and parallel banding with white becomes Onyx, 'dendritic refers to the inclusions. Opal on the other hand is quite different depending on it origin. The only thing they have in common is that all are silicates.

Gem Opal as found in Australia and a few other locations around the world is Mineraloid/Amorphous and does not have a crystalline structure, instead it is made of billions of tiny silica spheres in a mixture of SiO2 and water. This Opal forms in a different way, its formation is via the Silicon dioxide ‘soup’ entering fractures in the host material and solidifying over millions of years.

Chalcedony has a hardness of around 7 Moh whereas Opal is 5.5-6 Moh.