Hi, PL; Here’s a couple of quick pics of the specimen in question. Again, these are not of the best quality, but they are what we have at the moment. 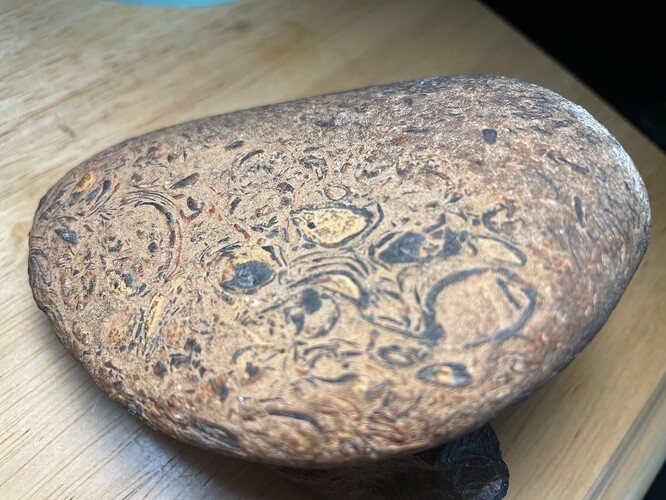 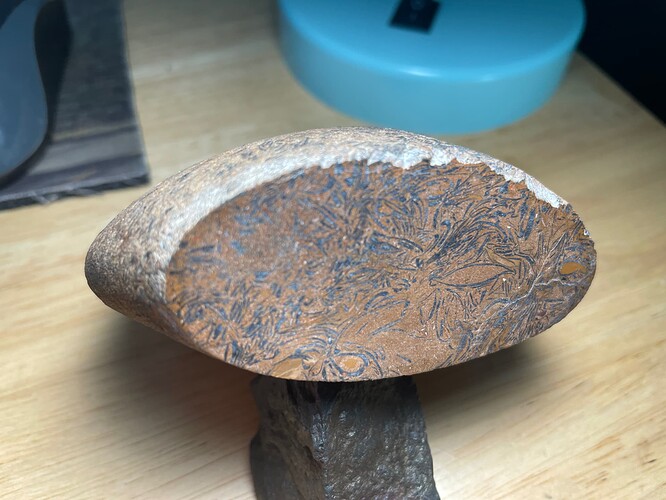 As I mentioned, I’m preparing a couple of slices to send out for further review & testing. I also have a couple of crumbs left from the sawing, should you be interested in assisting in this endeavor.

Many thanks for those, the last picture was ideal, it does look a little different to mine, but, I still believe its the same type of stuff, fossilized bivalves from somewhere in earths history, I still see nothing to suggest it’s extraterrestrial in origin.
If your research comes up with something else I look forward to hearing/reading it.

I will certainly keep you in the loop (loupe), PL.

I thought this was a great thread and enjoyed all the view points exchanged. There is evidence of major planetary collisions that occurred between the orbits of current Earth and Mars. What made the asteroid belt between Earth and Mars for example? Also, I have read chemistry reports that suggest that our moon was ejected from the Earth due to one of those collisions.

With just the evidence of these collisions in this solar system and many others … anything is possible. ;))

Thank you, Michael. I appreciate your observations & insights.

The Universe is a wonderful & awesome expanse! We cannot even begin to understand all that goes on within this expanse, yet it is truly worth our efforts to explore all that we can.

On the subject of “collisions,” I have a particular specimen that speaks of such collisions. I recovered this unusual piece a few years ago in Southwestern Arizona, near Quartzite, AZ. It appears to be the result of a collision between what is known as a “Rubble Pile Asteroid” and a bit of Lunar Olivine Gabbro. It also appears to be the remnant of a much larger Meteoroid. I can only guess at the size of the main mass, but it was likely several kilos, as a good part of the meteorite had vaporized during its entry. Perhaps it was this collision that drove both bodies spinning out of control towards Earth; similar to a high-speed car crash on I-80. 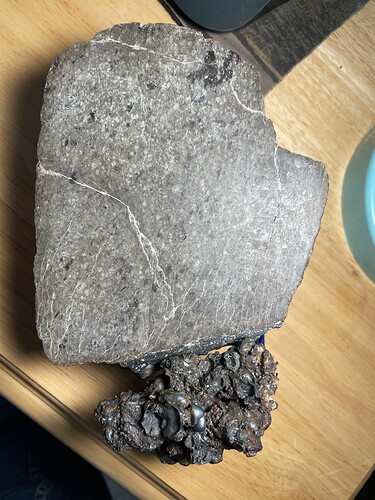 When I recovered this specimen, the “Rubble Pile” formation, which is Rutile (TiO2, Ni & Fe) was solidly attached to the piece of Gabbro. As you can see, there are multiple impact fissures running nearly all the way through the Gabbro. Gabbro, as you know, is a course grained igneous rock consisting of plagioclase feldspar, which is a mantle material. We have, of course, found Gabbro on Planet Earth, as it associated with ocean basalts, and volcanic eruptions. Finding Lunar Olivine Gabbro is a little more difficult, I would suppose. 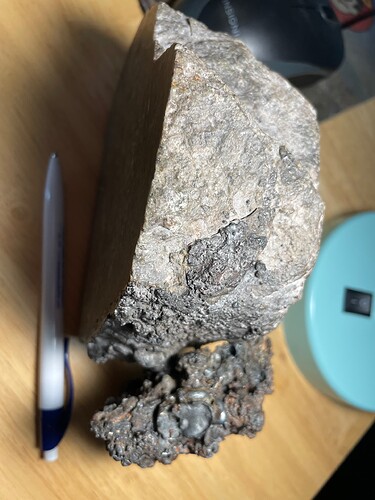 This specimen would indicate that the Moon was both volcanic, and that at one point, had oceans of water. Or, it would indicate that the Moon’s formation was the result of a massive collision, where elements & minerals of Planet Earth make up parts of the Moon. It is theorized that a Mars-sized, Titanium-rich Orb known as Thea, impacted Earth some 4.2 to 4.4 Billion years ago, while the Earth was still in a molten state. This impact created what is now known as the Pacific Ocean Basin, and the excavated material was launched above Earth and re-accreted to form our Moon. As you stated, “All things are possible!”

As for Earth, itself, we find the remnants of this massive collision in the volcanism surrounding the Pacific Ocean basin, as in the “Ring of Fire” stretching from Indonesia, to the Aleutian Islands, and southward along the North American & South American continents.

All in all, I like to think of this specimen as a “Microcosm” of what is happening routinely throughout the Universe.

As for the “rubble” circulating between Mars & Jupiter, as in the Asteroid Belt, I believe this to be the remnants of a giant impact between two or more large planetary orbs, similar to the impact of Thea & Earth. Unfortunately, the pieces & parts making up the Asteroid Belt have never re-coalesced, so it’s difficult to put the pieces of the puzzle together again. Perhaps Jupiter had something to do with this massive impact event, and why these pieces & parts remain separated.

We may just have to wait until we get to the other side to know exactly what is happening throughout the Universe? Until that time, we will have to act like cats, and hope that our curiosity does not get the best of us!

Steve, You have a refreshing non-confrontational attitude so atypical of those commonly seen on many forums. Cheers, Bear

Thank you, as well, Bear. It’s good to know that there is still a bit of humanity in humanity!

I am always happy to share and to learn from others.

On that subject, I have another unique specimen for your review. 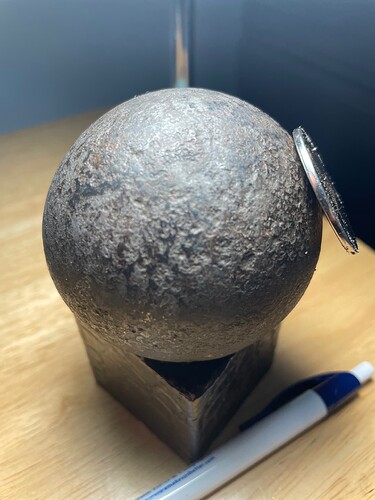 At first blush, one would say that this specimen is a “Mill Ball,” yet Mill Balls have undergone refractory processes, where all silicate materials are melted out of the iron. This specimen, if cut & polished, retains Olivine & Calcium Aluminum inclusions. There is also impact & thermal shock veining present. 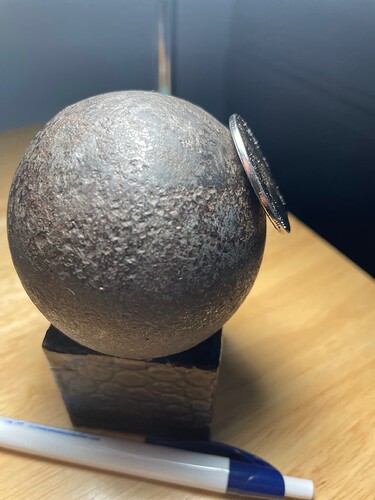 You will also notice the darkened, fusion-crusted exterior with ablative pitting. This is the result of its fiery entry into Earth’s atmosphere. The pitting, upon close inspection, are “oriented” to some degree, as there are “tracks” where the plasma (Fire) has melted softer areas of the NiFe. These softer areas are typically composed of silicates. 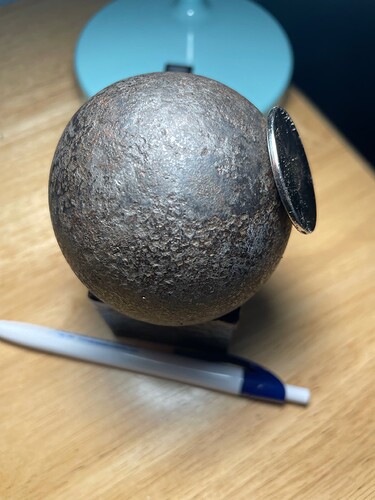 Under the microscope of a slice of an identical pairing, we see Neumann Lines, rather than the more pronounced Widmanstatten Pattern of Kamacite & Taenite (Nickel).

By the way, that is a Neodium, Rare-Earth Magnet wafer attached to the specimen. I had used my metal detector and Neodium magnets to locate over a dozen of these specimens, where several were buried a foot or more in the desert sands near Quartzsite, AZ. At that point, all of the specimens were entirely rusty, as in a fairly thick coating of Iron Oxide. None of the specimens are perfectly round, and I did find several flattened specimens, as in button-shapes, and cookie shapes. This particular specimen is more ‘egg-shaped,’ as opposed to perfectly round. It’s texture reminds of the Moon and its craters! 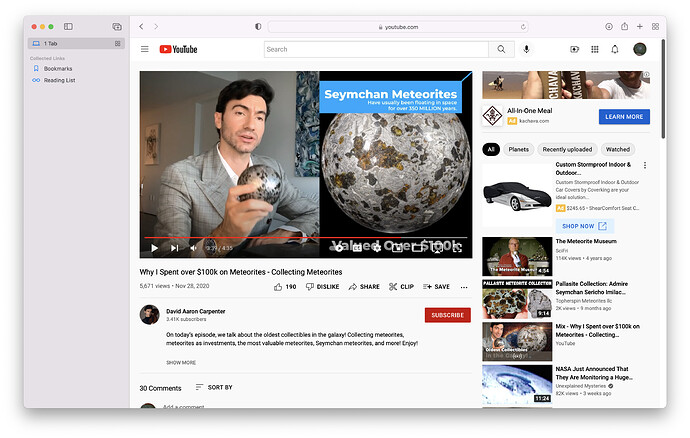 One of my specimens made it to ASU’s Meteorite Museum & Lab, as Lawrence Garvie reveals in this screen shot. I never did receive any credit from ASU, but that’s ok. At least this specimen is in safe hands where folks can have a look. 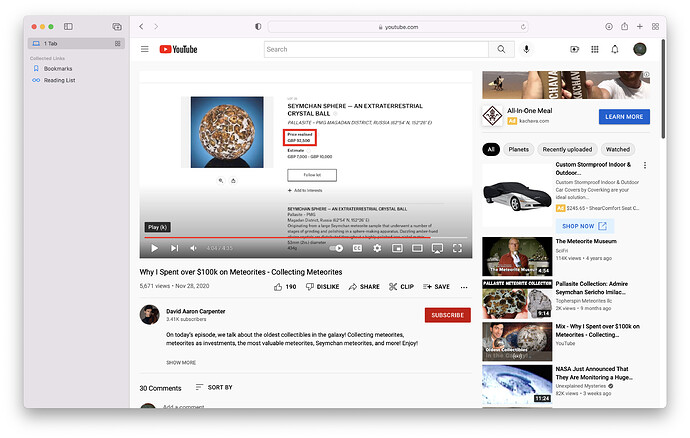 It is not “Brain Science,” or “Rocket Science” to figure out that these specimens are the cores of asteroids, or the remains of a Dead Star. When we consider that all the planets in our little Solar System are SPHERES, and that concentrated metals such as these, had undergone tremendous temperatures & pressures; both in their construction and their evolution to their current state. (Think about the shapes of rain drops and their physical properties. Or, consider the ‘spherical splatter’ when drawing a bead with a welder. The physics are all the same).

Let me know your thoughts, Bear. I look forward to further discussion & discourse with you. Of course, everyone else on this forum are welcome to chime in with their observations, opinions and insights.

It appears my photo of Lawrence Garvie holding a spherical meteorite did not make it. I shall try uploading again. 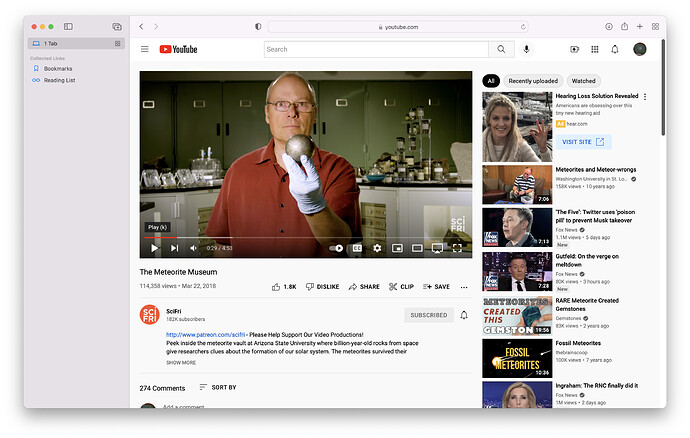 Remember as a kid when you blow a bubble? The shape it took? There’s are reason why planets are spherical. Starting out as a giant hot “hydrogen bubble”, our sun took upon itself to follow the laws of gravity and physics and become spherical.

Any liquid or molten (nickel/iron) object in gravity free space will form into a near perfect sphere, but if it were in a solid form (and suffered an outer space impact) it is likely that it would be malformed, yes? A spherical meteorite would be a great find. 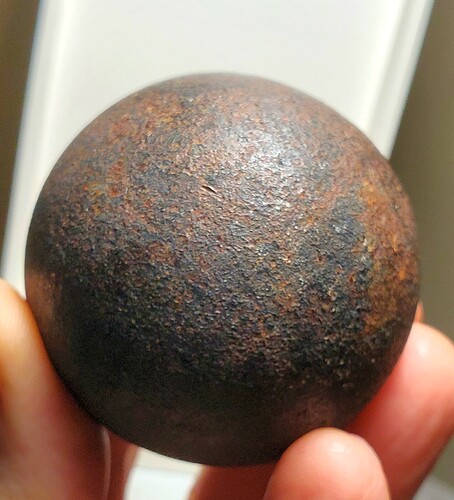 can you guess what this one is?

Thank You, Bear; You are very kind!

You are absolutely correct. Orbs are every where in our ever-expanding Universe.

I am presently at the Wyoming State Gem & Mineral Show, here in beautiful Riverton, WY. As a Vendor, I’m providing Gem & Mineral Identification & Testing. It’s been quite busy, as I’ve fielded a good number of questions.

Unfortunately, as I was unloading my wares, someone took off with a crate of my specimens & books. Among the stolen specimens was the 1.337 NiFe sphere, which I had presented to this forum.

It is a sad affair when one needs to keep looking over his shoulder for signs of such rabble, yet this is the world we chosen to live in. I suppose I will simply trust in Karma to ‘right the ship.’

Hope you are having a Good Friday, and that you have a great weekend!

Do keep in touch!
Cheers!
Steve

Sorry to hear of the theft… no good things await the thief.
But here’s best wishes to you for a happy and successful show.

Hi, Bear; I would venture to guess that what you are holding is a genuine spherical NiFe meteorite. Both the rust and the fusion crust (entry-melt) are tell-tale signs of its composition, along with the ablative pitting, divots & flow lines. It also appears to be about 350 to 550 grams.

I would also guess that the interior, should you choose to cut a window, or slice this beautiful specimen (I think NOT!!), would contain micro olivine & Ca crystals, along with Neumann Lines; indicative of its natural Ni structure of Kamacite & Taenite.

One thing is certain! It is not a cannonball, and nor is it a “Mill Ball.” It is, most likely, the core of a small planet, sun, or asteroid. My best guest would be a core of a dead star!