So about 3 years ago I bought several “Imperial Topaz” on Ebay as Faceting Rough /Crystals. I paid dearly but loved the color. when I went into my cabinet to show a customer, I couldn’t quickly locate the crystals because I was looking for that classic Imperial Pinkish orange and only saw Clear crystals. Then I realized those used to be the classic Imperial color. So I took pictures of three crystals that at one time were all the same color with one crystal that remains intact and was also purchased from a different supplier in Brazil. Has anyone seen the same thing, heard of why or how this has happened and what was done as a treatment to turn clear topaz into the imperial color as they once were ( Heating, irradiated??) and why did it fade to nearly clear? I’ve been cutting gemstones for over 50 years and never saw this before. - Mike IGS Pro Member 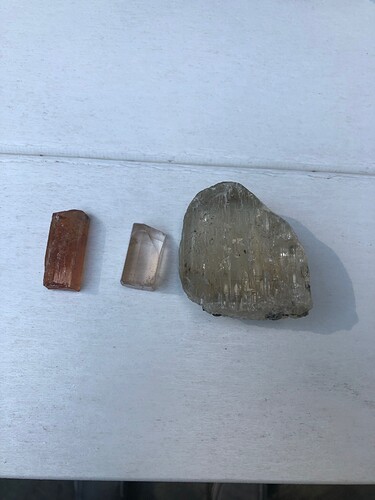 Radiation treated. One very simple way to detect this is to leave the material 2 or 3 days in the sun. If treated, the color will disappear.
Rule number one: NEVER buy gems on e-Bay. They sell you pixels.
The cristal on the right of your photo is not imperial topaze.

Although it’s been a while, I remember going to Topaz Mountain mine in Colorado to find a yellowish topaz. Think there was a caution about them fading in the sunlight, but don’t recall if the miner said that or saw it someplace else.

Hi Mike,
I totally agree one should not buy gem or rough from Ebay. I had an instant (lucky I did get my money back though my contact to ebay made no difference as the guy is still selling the same) where I bought a GIA certified emerald very cheaply. I even asked the seller before if it was definitely genuine and yes it was he said. The certificate checked out and was it turned out a perfect forgery, as when I looked at the stone it was patently glass. The seller did return my money within 24 hours (didn’t want the 2emerald" back) and is still as I say selling on Ebay even though I told them this was no less than fraud. Buy from a decent person that will not only honour the sale but will have honour themselves. Not easy in this day and age but there are people that are genuine and it is an economy to spend the time to find them.
Chris

Yes. I typically don’y buy gems on Ebay either. Every now and then I’ll see something there that looks potentially good ( their not all frauds ) but it’s getting really tough to buy anything online these days. I have people sending me gems to appraise and more than 50% are glass or man made. It’s always hard to tell folks that information. I know Topaz is irradiated but never saw one fade so much so quickly. basically from a nice peachy pink to clear. I’ve been doing this for nearly 50 years too and still I get taken every now and then. Thank you for your reply!

Thanks for your reply. I can’t actually tell from a photo much as you say you looking at Pixels. I totally agree with you! - Mike

Whether I would buy on ebay depends a lot on the amount of money involved, the reputation of the seller and the particular gem involved. If it looks too good to be true, it is. You can also protect yourself by using Paypal business and a credit card, as either/both will reverse charges in cases of fraud…of course, you may be stuck proving such and waiting for them to act. I don’t have a lot of faith in ebay policing themselves, as they seem to have a bias in favor of sellers who do a lot of volume and therefore bring in a lot of money vs small time buyers. Good Imperial topaz is rather expensive and only comes from Brazil. Ask the seller specifically about fading so you have documentation of his/her claims. Even ebay will support you if the item is not “as described.” -royjohn

There’s a topaz fee-mining site near Lake George in Colorado. Topaz Mountain
Topaz Mountain Gem Mine (Matucat Road deposits), Park Co., Colorado, USA (mindat.org)
There they say that 20% of the topaz found is sherry or champagne color. The material tends to fade in sunlight.