Can you tell me how to identify emerald?

Hi Everybody, This is my first post ! I purchased an emerald ring but I think it’s to green to be emerald!
How do I identify an emerald?
Thanks for your help. 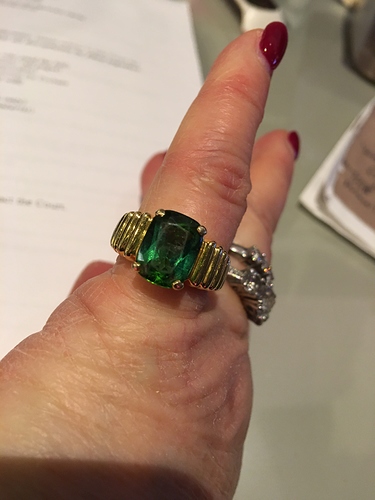 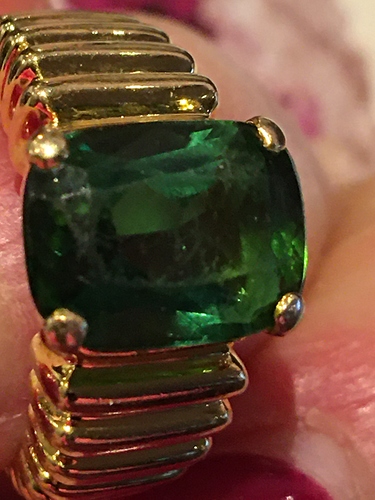 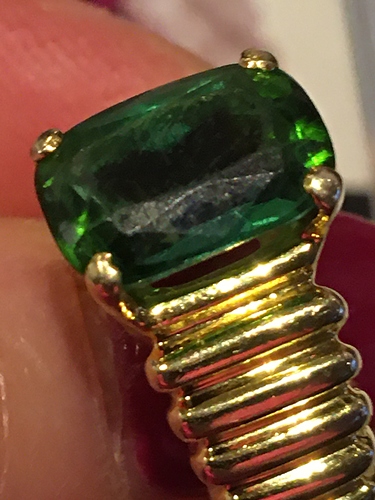 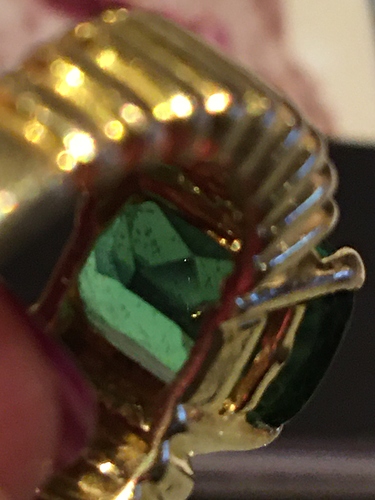 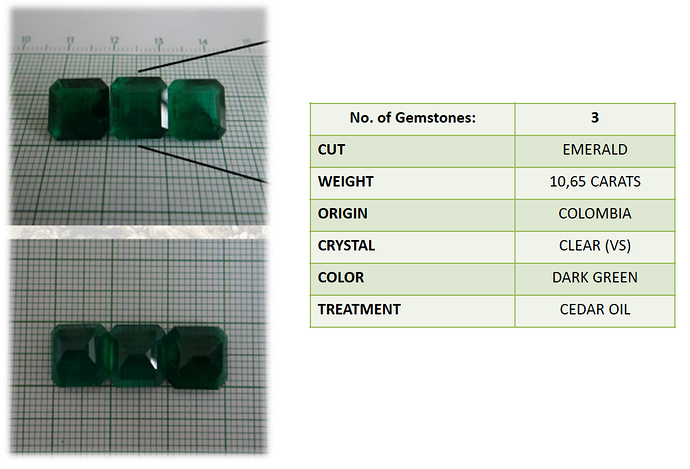 These are Muzo mine specimens from a few years ago.

They look just like this stone . I’ll let you know results . Thanks for your help.

The polish is so poor that’s it difficult to tell. Check the precision of the cutting. A valuable stone usually has a very good cut. That being said, the normal pavilion cut would be step cut. This doesn’t look like it. Emerald has pretty well characterized inclusions (jardin). Use a loupe and see if looks similar.

Thank you for responding . I took to a jeweler and he looked with a loupe and said it was tourmaline. A little over 4 carats . He said it could be polished for $250.
It is a beautiful green a d you can’t see the scratches when wearing it . I think I’ll just wear it as it is .
PS. I don’t know any of the jewelry lingo you used . Wish I did !

You’re never to old to learn

Hi, The jeweler told me it a little over 4 carats and pulled out a book with tourmaline pricing . I thought he was exaggerating when he said $2,600!! It weighs 8 grams and I thought I’d just wear it without smoothing out . Do you think it would increase value if I had it smoothed out ? Thanks

Green tourmaline is expensive with any piece over 5 carats. I believe your gem is green beryl. Since emerald is also a member of beryl family…it color is specifically green, other members of beryl family have other distinctive colors. Green beryl looks somehow like emerald but not considered as emerald. I have one large piece of emerald but when I brought it to GIA for ID, they confirmed that it beryl, but some agreed that it emerald. Differences about value–price per carat emerald and price per carat of green beryl.

Very difficult to be certain from just a photograph, however I would tend to agree with the jeweller you visited that it is a tourmaline. I have very rarely seen emerald cut in that style of antique cushion shape though it is not impossible. The colour is very typical of a nice green tourmaline and 4cts sounds about right.

On a few other comments, emerald is ‘beryl’ period, the depth of colour is far too deep to be called ‘green beryl’ which in my experience tends to be very light green and often indicates an aquamarine (also ‘beryl’ ) that has not been heat treated to make it turn blue.

On value I have no view on the ‘$2600’ quoted, and I assume this would be a retail price at the jewellers and bear no relationship to the money you may get if you wanted to sell it, which would basically be ‘as much as you could get for it’ if any one was willing to pay you for it.

If you want certainty you would need to have it tested, a good jeweller could use a refractometer to test the flat top table without removing the stone from the ring and this ‘could’ give a clear indication of the refractive index of the stone which could clearly separate tourmaline from emerald.

I would only bother if the ring was very expensive as there should be a massive difference in cost between a 4ct tourmaline vs. The same emerald (thousands of dollars)

As to getting it recut, if done properly the results could be amazing and the stone could really ‘pop’ as the cut today looks very poor quality to be honest, but the stone looks like a nice colour

I fully agree with you. To make a conclusion as to the stone’s identity based purely on the colour can be deceptive. Besides a loupe examination, using a refractometer would be my next step.

Emerald must have chromium or it is green beryl. A chelsa filter is a quick test,the color red will show chromium,and the best test is refractometer

In addition to the excellent responses already given, thought I would respond because this reminds me of an experience I had long ago and was one of the reasons why I pursued the study of gemology originally. I had gone to the jewelry center in Los Angeles, wanting to purchase an emerald ring, and for a long time, thought this is what I had gotten. But as I began pursuing my studies in gemology I tested the stone eventually and concluded that the stone was a synthetic emerald and is what your stone looks like to me. I, nevertheless, like the ring as it is in gold and with diamonds surrounding. But, I swore I would never let this happen to me again (along with one other experience) and became one of the reasons for my studying gemology. There is nothing wrong with getting a synthetic emerald, but ethically (and probably legally) I should have been told this. It is relatively not difficult to answer your question, but since you said you were not familiar with terms, I did not include more. However, the only way for identification is determination of refractive index, pleochroism, and optic character, as well as fluorescence and magnification.

Thank you for your reply