Had this for sale but nobody knows what it is or how to price it. 17 x 12 mm crazy broad flash…any recommendations? 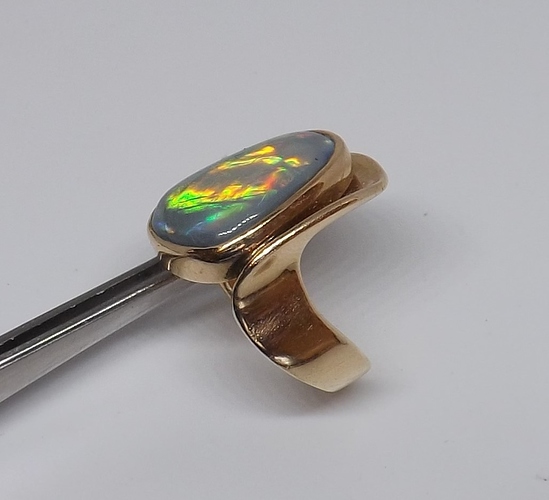 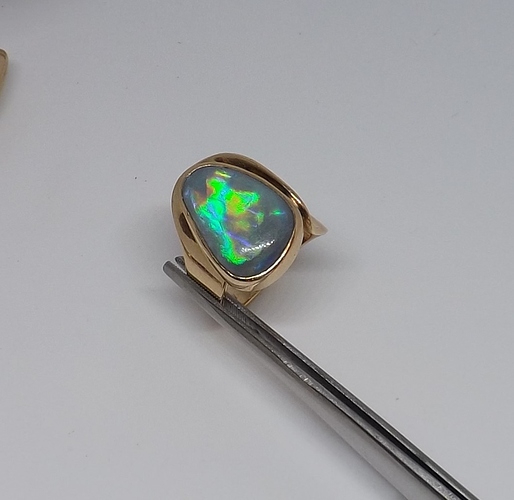 the background of the gem reminds me of Andamooka Opal from Australia
see images! 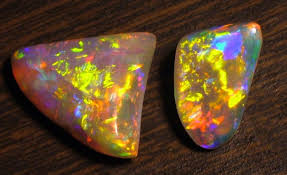 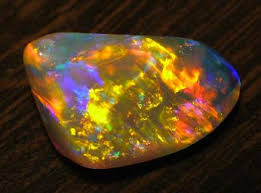 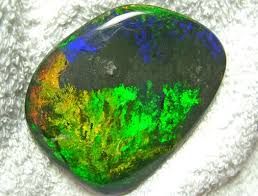 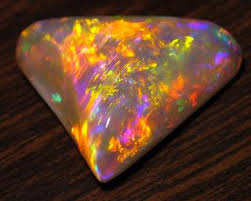 Thank you for the input. In the opal world (super newbie) how does this rank as far as desirability? I am fascinated by colored stones hence my joining and am a babe in the woods er….mine… 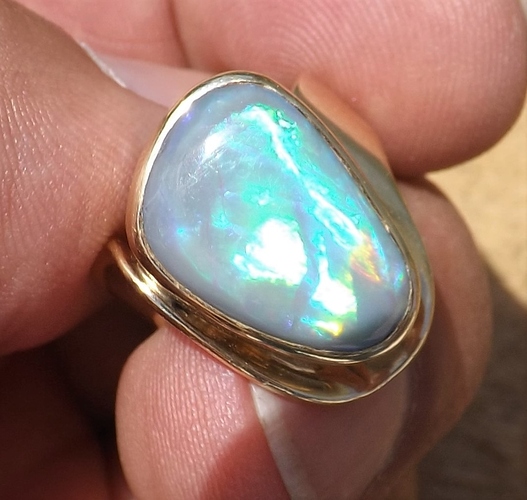 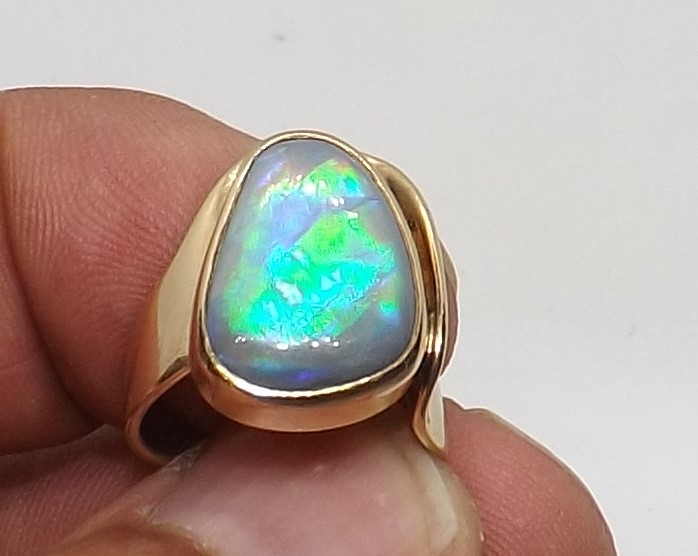 I am not an opal expert but I am to understand that the whole cab of the opal should a flash of colour, and when the stone is moved the flash should be right across the cab in all directions with no dull spots or lack of colour flash. also the price jumps dramatically with good red flash in the opal
may be some other member who knows opal can help
thanks

I just picked up a tray of opals that I have a few minutes ago and moved them back to my storage and one caught my eye for some reason and then I remembered why. I pulled this discussion back up and had to look again and there it is. You have MY opal that I need to finish up. I have been working on a rough andamooka rough for about 3 months now and just have not figured out what I want to do with it. It looks just like what you have in your piece. It is indeed kinda odd but it is nice. The entire face of the stone has one face of color that changes in my stone. Not a lot of little flashes but mostly a few big ones in my stone. I can’t figure out how to post pictures yet. Anyone know how to do this from an apple product?
All the best
Otter

Seems to be what I have…one side flashes green and the other flashes red. On opal guy thought 150 a ct is cheap but didn’t want to try to pull it and break it. The orientation is probably key on these since the crystals are so long.

If it’s not a triplet than it could be about $225-$300 for a stone that size. I can’t give a price of the setting since there is no description of metal used.

Not a triplet, I had it priced pretty much spot on at 650 as it has 207 in scrap 14K gold. My thought was 500 would be a good deal for an end user. You guys are great…look at the emerald I posted if you would.

Pricing is basically what ever the market will stand. If priced to high you can always come down. VERY hard to go up though. I’m assuming it is 14ky gold, so how much gold? How much time spent designing it. A lot of variables on this. I have problems myself & have set about a $65. per hour price on my time.Some things I charge more on & others a little less. I’m 80 & do this as part time & as a hobby anymore too. I know some that charge over $100. an hour too. Hope this helps some. Howard

It’s kind of dead around the edges, so there is a fair amount of weight you are paying for that doesn’t add any value. It also looks like it’s in need of polishing. The surface seems dead, especially in the second photo.

It looks like a nice stone indeed… Let me try and add ‘some’ words to an already lengthening discussion. And consider me an enthusiast, not even a pro.
First of all I don’t think it is considered black opal because the bodytone looks grey (‘dark’, N5-N6) and having said that it also is not typically Andamooka, because that field produces primarily white, (semi)crystal and matrix opal (which can be ‘cooked’ into black but has a whole different nature). Because it is dark it most likely is solid -seam- opal and not a triplet or doublet either. It IS Australian however, but might come from a variety of fields, such as any field near Lightning Ridge or one of those surrounding Coober Pedy that also produce dark opal, like Lambina.
To my judgement the fire seems not to be that directional as supposed earlier… take a look at the picture and you will see that your camera has focused on either the ring or your fingers. The firey glassy nature is one of the reasons opal is very hard to picture: the fire simply can be missed out. As you said yourself, the colour IS directional.
And I agree with what Azeller said about ‘dead’ edges: that is where the fire seems to disappear, It looks to me the thickness of the seam of precious opal might have not been properly taken into account in an attempt to improve on the dome and carat weight, if so than on the sides you won’t see fire simply because there is none. It will show the base: common opal (potch). That will render the cut flawed. It is best seen in the first picture. Best not judge such a stone by carat weight.
The fire thus might not be all through, but a layer ‘‘on’’ dark base. Nothing wrong with that. If cut right.
It is set in a sturdy ring however, which is important because opal is quite soft and more prone to getting damaged, certainly when set in a ring. Again agree with Azeller… the use of opal as a ringstone can and will (has already?) affect the polish. It might need to be polished again? Or the stone itself is kinda dull…
About the value: has to be judged irl and compared to the carat weight. That will end any discussion about the cut according to the fire and the polish too.

You may like to read earlier posts on opal or any of some -older- popular books on this subject, like those written by Paul B. Downing or Len Cram. And if you really want some methodical approach: read about opal nomenclature and classification.