I was sorting some stuff and went looking for a stone display box. I pulled this little one inch square one from my box of random stuff. 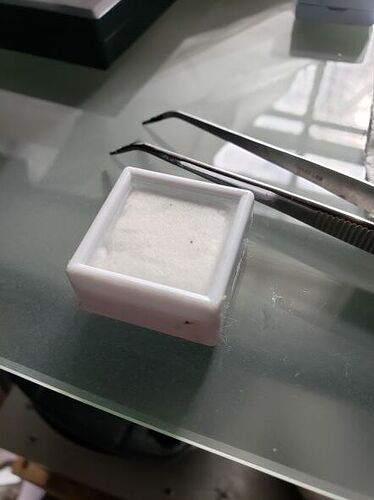 When I opened it I realized it was not empty but the cotton was covering some stones! 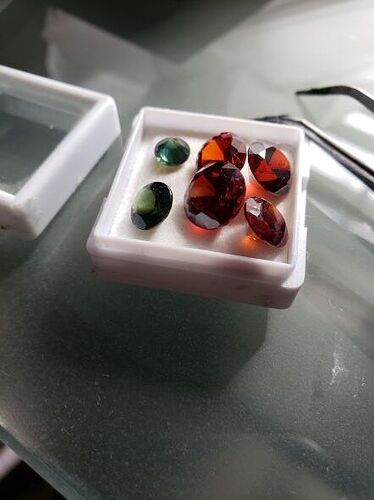 I really have no memory of hiding things like that in any cases. I did buy a box or random used empty display boxes once. Maybe they came with that?

Anyway. The orange ones are perfectly clean, have no reaction on the polariscope and a really high RI - like over 2.0. I’m thinking CZ?

The green ones are the question. At first I thought maybe green corundum? (score!) But the RIs are too low. They run around 1.75 give or take depending on how I bump the stone around on my digital meter. They have a little flash on the polariscope which reminds me of the ADR I’ve seen on garnets.

I can’t see hardly any flaws in the larger one. But the smaller one has some obvious inclusions. It is a 5mm round and weighs right around a carat. Here are some pics of the inclusions. 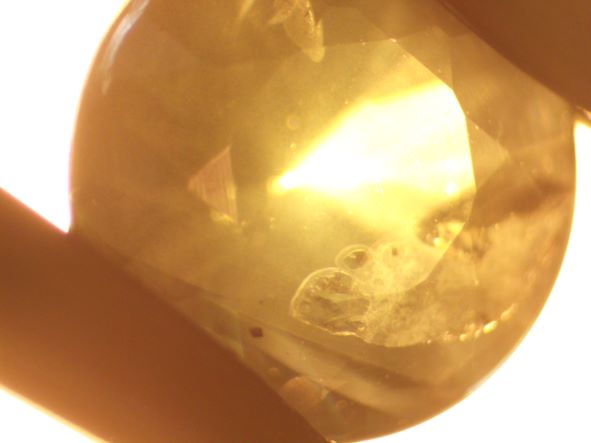 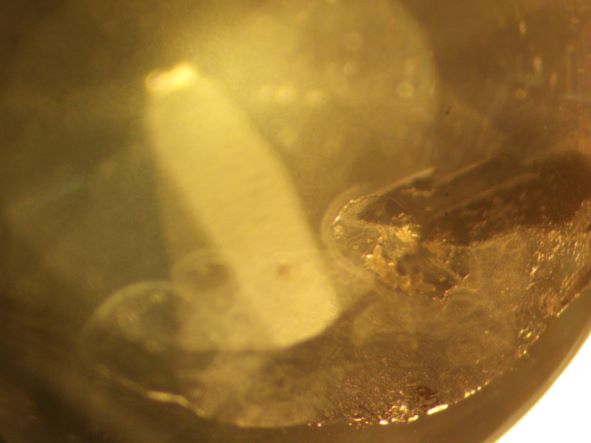 Yeah, the meter reads a little high but consistently so. I have tested it on a lot of known stones and am pretty confident in using it as a relative number. I also have an analog I can use but I can’t see anything for those stones on that meter, so I think they are above 1.81.

Tourmaline is a good idea. I’ll check into it.

IDK how experienced you are with the polariscope…you need to be able to distinguish ADR from double and single refraction, so you would need to practice with knowns. The problem with the digital is that is isn’t real accurate and doesn’t, AFAIK, give you any indication of double vs single refraction or optic character and sign, which can be determined with a regular refractometer if the stone is in range. I am not clear about what you are saying about your green stones…are they over the limit on your conventional refractometer, too? You should get an SG on these…it is easy if you have a scale which reads to 0.01 gm and these pocket scales are only about $20 now. If you get hold of Hanneman’s book, Affordable Gemology and learn visual optics, this is helpful, too. It would allow you to tell whether these look like tourmaline (clearly doubled rainbows) or peridot (really far apart doubled rainbows) or something singly refractive.

These stones look like red and green labradorite to me.

I do need more practice with the Polariscope. I haven’t tried using the conoscope at all. But, I can tell the lack of any changes on singly refractive things and the obvious double on things like sapphire. I have seen a few examples of ADR on garnets. So, I’m getting there. I have a scale and do some of my own SG measurements. The orange stones had SG’s well over 5. I’m still leaning towards CZ for those.

I’ve heard of Hanneman’s book but never bought it. I just ordered it from Amazon for $12 including shipping! I think I even have a couple of his kits for making homemade instruments lying around somewhere.

I don’t see much sparkle in the orange ones - which I would expect with CZ. I’m wondering now if it isn’t just high lead content glass. That can go to 5.9.

Im guessing garnets except for tgw bluish green one at top