Someone asked for a little info about this “labor of love” jewelry, ill start with the appr just completed, & i will show the mapping of the stones & info about each stone as it was bought from the cutters over several years. The gold frame was modified as the stones were added & finally all the baskets were changed to white gold to add to the light entering the stones for effect. This pendent has been controversial for me because no one had ever seen stones with the color effect as close to the standard as possible. This project started about 2006 as a single stone, the the top one, and the journey started with help from my jeweler John Dixon, of Maryland. Ive been thrown off several sites defending the pendent because no one believed you can buy stones at the low prices I did and still have value almost off the charts for buys off the web, ebay. Any comments are welcome, good & bad-thanks, steve… 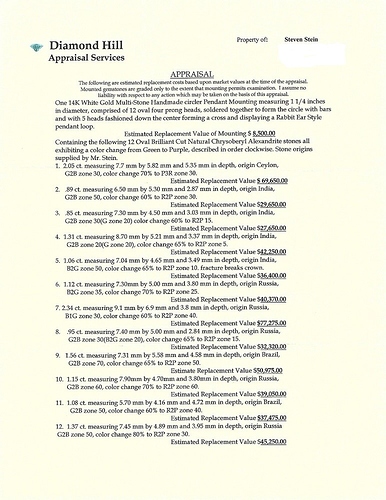 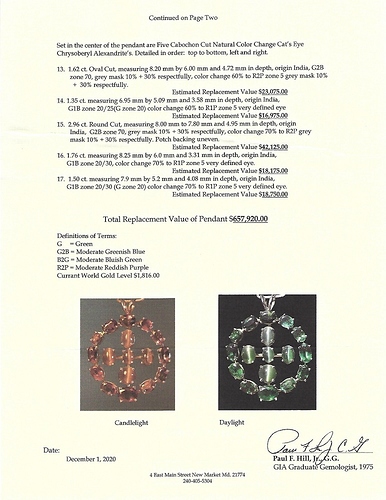 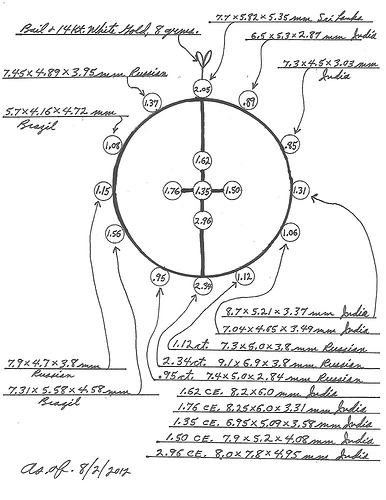 This is not a credible “appraisal”. Put no faith in it.

mdsandifer,by all means, back up your statement, i can do same here-please!-steve…

I can’t see the stones in the photo well enough to form a reliable opinion of how well the appraiser evaluated them. The photo does look more like reddish orange than reddish purple, as characterized in the report, but it isn’t possible to be certain. I do have a few concerns about the report. The appraiser reports no certification in appraising, just a gemologist certificate, so he’s not holding himself out to have any particular expertise in valuing, just in gem ID. He doesn’t report any estimated weight for the mounting, which I would think is standard practice.

While one could use a piece by piece valuation approach with a piece like this, I would think it would be supplemented by a use of comparables at auction for a one-of-a-kind piece like this. You wouldn’t be likely to find any exact or even close comparables, but you could find some pieces at auction over the past 10 to 20 years which had multiple alexandrites in them and extrapolate from there in the typical way that you use comparables. If you are buying in a jewelry store, a piece by piece appraisal for replacement value may be appropriate. However, if you are a seller looking for a willing buyer for a one-of-a-kind item, some form of comparable approach makes more sense, and the value is going to be lower.

What I would suggest is that the OP send his report to some auction houses, saying he’s thinking of selling the piece and asking their advice about a possible minimum bid or estimated sale price. These people (Skinner’s, Sotheby’s, Christie’s) know there business and can offer a reasonable estimate of value. If I really thought, after some investigation, that my piece was really worth something in the six figure range, I would get an appraisal from a very well known appraiser with a Master Appraiser’s Cert., if only to know what I should insure the piece for.

My last comment is that it just isn’t likely that one is going to buy premium color change alexandrite at less than a quarter of what it is ultimately valued for at retail. The folks who sell this stuff are quite aware of its value and don’t sell it for far less than it is worth. Assembling a group of matching stones and designing a very artistic piece does increase value in the aggregate, but not to an unrealistic degree. You are just not going to buy for 5% or 10% of ultimate value…it just isn’t going to happen.

Given all of the above, I’d get a second opinion at the very least.
-royjohn

I will try to answer some issues about this pendent, since the first stone was bought in 2006 this has been a project, one of a kind, i think 4 or 5 different appraisers have viewed, handled & scoped almost every stone as it was being built, some of the early appraisals were in the $40,000.00 range for 5 stones in a small pendent, 2 cut stones, and 3 alex cats eye stones. To be fair only one stone has been lab certed & it came back with a good report, will include, one of the first reports was done in 2010. My latest appraiser, said he has several people in NY who are interested in the pendent & are willing to come to us for a possible sale, my problem is if i sell i cannot replace this material at todays prices. I have turned down many offers to date and i think most people will break down the item & sell the stones as singles or so. The pictures do not give this pendent a good rep, the ideal is green to red as the standard, in incandescent light the color change is good with the green color almost non-visible, under UV, the green is gone, all you see is a red color, mainly because of the chrome content in the alex material that does the magic. As for the value put on this pendent as it is, the appraiser said with the amount of stones in one item, 17, the quality of the material that shows green in daylight, sunshine, the average size of the stones at 1.3cts or more & the better than average color change, for INSURANCE PURPOSES, he put the large retail value. I know the insurance companies are the ones who will cover such a cost, all else is at the wholesale end of the scale, 20-30% if one is lucky with a buyer. My wife wears a wedding ring with a 1.48ct alexandrite stone appraised over $30,000.00 several years ago, excellent color change green to a reddish color. I have been allowed to post the appraiser & the cert for the top stone in the pendent. 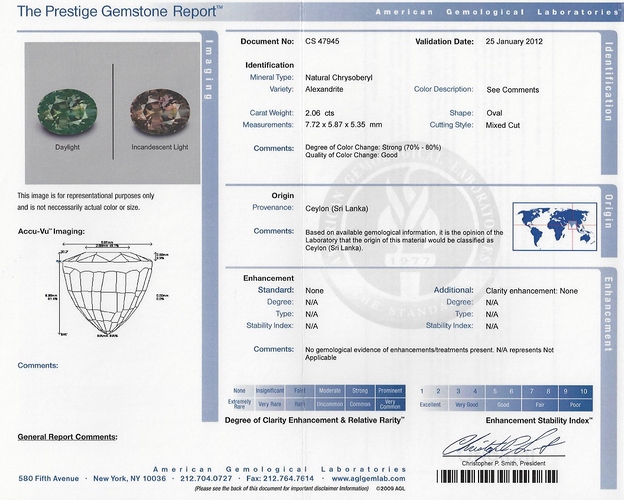 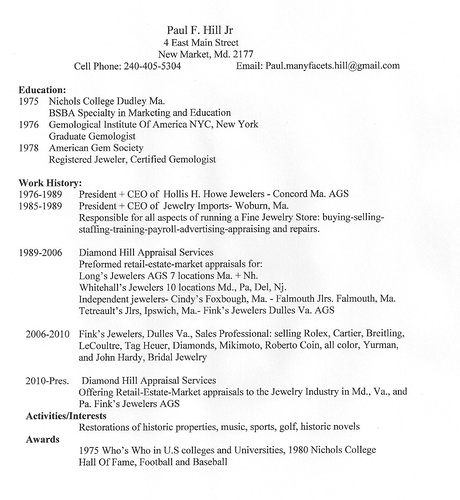